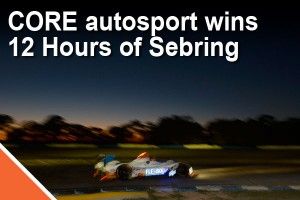 With ten ORECA-FLM09 on the starting grid of the annual 12 Hours of Sebring, the Prototype Challenge class was promising to be fascinating. Actually, the race was lively and rough with several crashes and a great battle between CORE autosport, three times champion, and RSR Racing, in pole position. Colin Braun, Jon Bennett and James Gue finally triumphed by two small seconds only.

With a perfect start from the PC class pole position, Bruno Junqueira almost even reached the second place on the overall ranking after one hour of race, taking advantage of the first caution. He was then followed up by RSR Racing’s sister car, handed over to Tagliani. RSR Racing maintained itself as a leader throughout the first three hours, though threatened by 8Star, Performance Tech and CORE autosport. BAR1 had not a very successful race due to a clash between its two cars.
After one third of the race, while PR1/Mathiasen took the lead, the team was just about to face some difficulties in the beginning of the fifth hour. Indeed the No. 54 did hit 8Star’s No. 38 which was right in the middle of the track after having just bounced off the tire wall. That crash between those two Prototype Challenge contenders suspended the race for a short moment.

The duel between CORE autosport and RSR Racing opened with the race’s restart. The three-time champion and his opponent alternated as leaders over the course of cautions and pit stops. RSR Racing was not able to take advantage of the numbers – No09 and No08 – for much longer. After a spin the BAR1 No. 87 was in distress in a corner exit and Alex Tagliani, arriving at full speed, was not able to avoid it. Both cars had to withdraw from the race, a couple of minutes from the halfway mark.
While RSR Racing and CORE autosport remained very close throughout the 7th and 8th hours of race, Starworks who, after a difficult start was coming back within the Top 3, took advantage of the different yellow flags. JDC/Miller was then in fourth position, making its debut in the discipline. Ahead of them, the battle was getting more and more intense as RSR Racing and its trio Junqueira/Ende/Heinemeier-Hansson, were just a few seconds away from CORE autosport and its crew Braun/Bennett/Gue. That fight lasted until the very last minutes of the race.

Less than forty minutes before seeing the checkered flag, victory could still go either way. As the safety car went out one more time, both CORE autosport and RSR Racing went into the pits for one last refuelling. Colin Braun left ahead of Bruno Junqueira and the battle began again. One last fight later, Braun crossed the finish line first, two seconds only before Junqueira.

After Daytona, it’s a consecutive win for CORE autosport in Prototype Challenge, defeating RSR Racing and Starworks Motorsport. For its first apparition in this class, JDC/Miller finishes in fourth place.