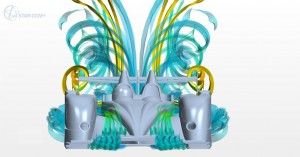 ORECA heads into the 2014 24 Hours of Le Mans Test Day with a full program. In LM P1, the REBELLION R-One, designed and built by ORECA Technology for REBELLION Racing, will be making its debut in La Sarthe as the first LM P1-L to race alongside the three manufacturers entered in the LM P1-H class. On the LM P2 side, several new chassis will be on track with the debut of the ORECA 03R. Finally, ORECA will again support the TOYOTA Racing team with its two TS040 HYBRID entries.

After 18 wins and 15 pole positions in all series combined over the last three and a half years of competition, the ORECA 03 will see the debut of its little sister, the ORECA 03R. As an evolution of the 03, the ORECA 03R received a new aero package, notably with the front bodywork that has been modified to allow for new airflow over the front wheel cover, as well as a revised rear cover.
While adhering to the letter and spirit of the LM P2 regulations, the design department at ORECA Technology worked with one central idea : to give the prototype built in the Signes workshops a new potential in terms of performance, in particular on quick circuits. This « Le Mans » configuration will give way to a « High Downforce » kit for the res of the FIA World Endurance Championship and European Le Mans Series rounds.

« The ORECA 03 has proven its qualities and its reliable mechanical foundation » explains David Floury, ORECA technical director. « With the ORECA 03R, which benefits from a new homologation, we logically and necessarily brought evolutions in terms of the aerodynamics, according to the LM P2 rules – that’s to say with the willingness to adhere to a moderated budget for the teams. The clear goal is to take the next step in performance in accordance with the characteristics of Le Mans. These modifications take into consideration rules which were introduced after the ORECA 03 was homologated, such as the openings above the wheels. Overall, our objective was to refine the aerodynamics. There will also be other detail changes, but not immediately visible. »

As was the case last year, ORECA will be the most represented constructor at Le Mans with eight chassis to take the start, seven ORECA 03R and one Alpine A450. Six countries will be represented in the teams : United Arab Emirates (Millennium Racing), France (Sébastien Loeb Racing, Signatech-Alpine), Russia (SMP Racing), Switzerland (Race Performance), Ireland (Murphy Prototypes) and China (KCMG).
At the same time, ORECA Technology’s know-how will be present in LM P1 through two REBELLION R-One entries. Following its race debut at Spa, with a solid seventh place overall, the new LM P1-L of REBELLION Racing is still in its learning phase and will continue the development program started a few weeks ago. Between the Belgian race and the Test Day, the car completed three days of testing at Circuit Paul Ricard.

« It’s an important day for all of the ORECA teams present at Le Mans » admits Hugues de Chaunac. « This Test Day has a lot of new going with it, whether it’s the REBELLION R-One or the ORECA 03R. As always, it’s a unique opportunity for our constructor department and our customer teams to gain as much information that is valid as much at Le Mans as it is for other future races. When you add our support to the TOYOTA Racing team, and our engine department working with seven of the eight chassis in LM P2, the day will be intense and enriching. »

Through its programs as a team proper or in support of major manufacturers, ORECA will be taking part in its 20th Le Mans 24 Hours. It will be its seventh as a constructor.