ORECA’s engine department, based in Magny-Cours, has begun year 2014 in top gear. Rally-raid with the Dakar, Endurance with the 24 Hours of Daytona, also the ERC alongside Skoda and soon the F3 with Renault and the WTCC with Lada… There is plenty to do both in the workshops and on the tracks.

ORECA Engine’s season started off with the Dakar, from Argentina to Chili and including Bolivia. Taking care of the SMG buggies, the Great Wall prototypes as well as the Ford Rangers, this 2014 edition kept the engine’s department very busy. It came to an end with three stage wins – two for the Red Bull Team SMG buggy driven by Carlos Sainz, one for Carlos Sousa’s Great Wall Haval – and a final eighth place for Christian Lavieille’s Great Wall Haval.
« Regarding our engines, the outcome is positive overall even though the results themselves are quite reserved » confides Serge Meyer, Director of the engine’s department. « Our engines have won three stage victories which is a very positive thing facing the numerous Minis. With Red Bull Team SMG, Carlos Sainz was in the lead of the overall ranking for some time. Performance was there. Ronan Chabot finished well after his participation as a water-carrier. Regarding Great Wall, Carlos Sousa encountered a problem with his turbo the day following his stage victory. We have to wait until the car is back before we can look into that in more details. Christian Lavieille was steady and finishes in the Top 10. Finally, the Dakar ended better than it had started for Ford Ranger. The first week was marked by some mechanical problems which were not to do with the engine. On the whole, the performances are motivating for what is to come next.  »

ORECA Engine then went onto the 24 Hours of Daytona, managing the Nissan V8 that powered the ORECA 03 of Muscle Milk Pickett Racing, 5th place overall and 1st in LM P2. 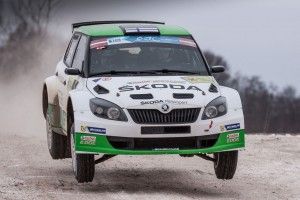 After South America and the United States, our engineers were expected in Latvia for the second round of the European Rally Championship which marked the Skoda Motorsport’s first appearance in 2014. Both official Skoda Fabia S2000, whose engine preparation is carried out by ORECA as a technical partner, shined. Esapekka Lappi and Janne Ferm finished in first place, while Sepp Wiegand and Frank Christian ranked fifth.
« I congratulate Esapekka for his third win in the ERC » said Michal Hrabanek, Director of Skoda Motorsport. « Once again, in Latvia, he has confirmed his unquestionable talent. Sepp also deserves recognition for his great performances in very tough conditions, especially during the first day. We can be satisfied with the launching of our new rally season. Nevertheless the priority in 2014 remains on the development of the new Fabia R5. »

At the same time, ORECA Engine will be alongside Lada, as part of World Touring Car Championship. The Russian manufacturer will line-up three Grantas for James Thompson, Rob Huff and Mikhail Kozlovskiy.
« We are in an active phase of preparation » explains Serge Meyer. « We have worked a lot on the engine and some tests with a ‘lab-car’ are due very soon. We will test the 2014 engine installed in the 2013 chassis before the first laps of the new Granta Sport which is in accordance with the new rules and regulations. »

ORECA Engine continues to develop the Renault by ORECA engine which will power several teams in the European F3 Championship. Same thing regarding.