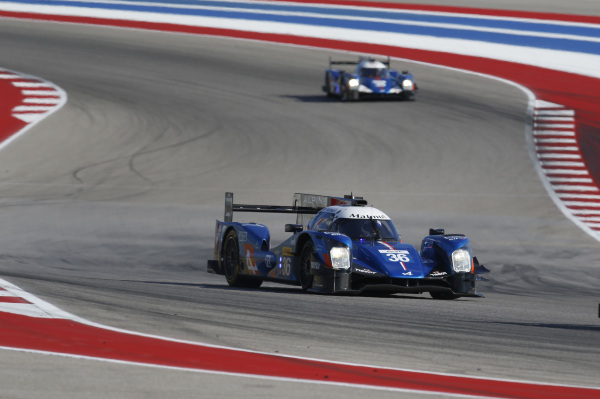 The Alpine A460s were in sparkling form in qualifying, with home hero Gustavo Menezes and Nicolas Lapierre annexing the first pole position of the season for the N°36 Signatech-Alpine by almost a full second! In the hands of David Cheng and Nelson Panciatici, the sister N°35 Baxi DC Racing Alpine entry similarly achieved its best grid position to-date for a six-hour race as the pair lapped fifth-quickest in LMP2.

The green flag dropped at 5:00pm on Saturday under the stifling Texas sun, with an air temperature of more than 35°C. On the opening lap, the N°44 Manor snatched the initiative at the head of the LMP2 field, with the two Alpine A460s in hot pursuit. Roberto Merhi, Nicolas Lapierre and Nelson Panciatici proceeded to put on a thrilling wheel-to-wheel battle worthy of a grand prix around the spectacular Circuit of the Americas until ten laps in, when the N°36 Signatech-Alpine reclaimed a lead that it would not subsequently relinquish.

After 45 minutes, Lapierre passed the reins to team-mate Stéphane Richelmi, who produced a double stint as day turned into night. Although it never dipped below 30°C, the temperature did cool off slightly as humidity levels reached almost 70 per cent.

These conditions unsurprisingly took a physical toll on the drivers, with Panciatici being forced to abandon a planned double stint early on in the race. Suffering from dehydration, the Frenchman found himself having to hand over to Cheng before being taken to the circuit’s medical centre to recover.

The Baxi DC Racing Alpine was then struck by further misfortune at the beginning of Ho-Pin Tung’s second stint behind the wheel. A heavy impact with a kerb prompted a return to the garage to change the front end of the car and its front suspension, but following a swift 17-minute repair job, Ho-Pin and David brought the N°35 car safely home in eighth place in-class.

At the same time, the N°36 Signatech-Alpine was continuing to lap the Circuit of the Americas with metronomic consistency. Following Richelmi’s double stint, Menezes and Lapierre maintained an equally strong rhythm to establish an advantage of a full lap over their closest pursuers.

Menezes was afforded the honour of finishing the race on home turf, and as he completed his final stint, the Californian could scarcely contain his emotions as he crossed the finish line to win in front of family and friends.

The result enabled the N°36 Signatech-Alpine trio to stretch its lead in the championship table to 38 points, with the N°35 Baxi DC Racing Alpine remaining in ninth position.

The next race on the FIA World Endurance Championship (WEC) calendar will take place at Fuji in Japan on October 14-16.

Bernard Ollivier, Deputy Managing Director of Alpine: “What a race! It is easy to forget with the success we are enjoying that this is still only our first season running the Alpine A460s, but it is obvious that we are continuing to make progress every time out. We set the tone in qualifying in Texas by claiming our first pole position of the season. In the race, the entire team produced a flawless performance, and it is a source of immense pride to see Alpine win in the United States. With a perfect display of panache, the Signatech-Alpine drivers have increased their overall championship lead once again, meaning the pressure is most definitely on the shoulders of those trying to catch up. As for the Baxi DC Racing Alpine, we are convinced that its consistent improvement will soon yield the kind of result its crew is so clearly capable of.”

Philippe Sinault, Team Principal, Signatech-Alpine: “I think this was our most polished race since the start of the season, in every aspect, from the set-up of the cars and our strategy, to the performance of the drivers. We hit the ground running for free practice and winning pole position was an initial satisfaction. Physically, it turned out to be a tougher race than we were expecting. Nicolas, Stéphane, who was extenuated after his double stint, and Gustavo all accomplished their mission to the letter and that allowed us to challenge for our fourth win with the N°36 car. And, as we saw early on, the N°35 car has made progress, too, even though a few grains of sand got into the machine. After an excellent start, Nelson suffered from bad dehydration and we had to change our strategy. David put in his best race since joining the team but we then lost ground after Ho-Pin hit a kerb. If things go a little more in its favour, I can see this car fighting for a top-five finish each time out…”