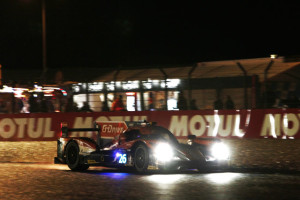 For the second year back to back, and the fourth time in six years, an ORECA chassis will be in LM P2 pole position at the start of the 24 Hours of Le Mans. In total, four prototypes designed by ORECA will monopolize the first two rows of the starting grid. Having already clinched the pole position in both Silverstone and Spa as part of the FIA World Endurance Championship, G-Driver Racing got a third front-row start with the ORECA 05! René Rast, Roman Rusinov and Will Stevens made the difference on Wednesday night during the first qualifying session, and the two following sessions were disturbed by heavy rain. Signatech-Alpine’s two Alpine A460 will start from the second and third rows, followed by Manor’s ORECA 05.

G-Drive Racing holds onto the pole position, Baxi DC Alpine made it through the rain…
Though it had already been raining during the free practice sessions, the first qualifying session had allowed the drivers to fight the clock, looking to set the fastest lap time possible. That was not the case this Thursday during Q2 & Q3 which were punctuated by several more or less strong showers. Under those conditions, it became difficult – not to say impossible – to try to shake up the hierarchy established on Wednesday night.
During the second session, which started with a dry surface, several teams decided to complete a couple of laps in order to get their bearings under the rain. Baxi DC Racing Alpine made it through the rain and posted the best lap time of Q2, in front of KCMG’s ORECA 05, while Thiriet by TDS Racing’s ranked fourth, in front of Signatech-Alpine’s second Alpine A460. Eurasia Morotsport’s car, damaged the night before, was able to take to the track again.
During the third qualifying session, rain showers got heavier, to such a point that most of the teams remained in the pits during the first minutes. Twenty minutes in the session even got suspended for about an hour. The contenders still got an opportunity to be on the track for the last 45 minutes, for one final rehearsal.

The order on the starting grid remains unchanged from the first qualifying session. Consequently, G-Drive Racing clinched the pole position, the second one in two entries in the 24 Hours of Le Mans for the ORECA 05. René Rast (3.36.605) posted the reference time on Wednesday night. The two Alpine A460 entered by Signatech-Alpine will start from the second and third rows thanks to the performances delivered by Nelson Panciatici (3.37.175) and Nicolas Lapierre (3.37.225). For their first entry in the classic challenge in La Sarhe, Manor will start from the fourth place. Thiriet by TDS Racing ranked seventh, KCMG ninth and Eurasia Motorsport eleventh. Currently in ambush, these three cars will too have a big role to play in this race.
The two Rebellion R-One, also designed by ORECA, posted the seventh and eighth times overall, behind two factory Audi. Tuscher/Imperatori/Kraihamer’s No. 13 car preceded Prost/Heidfeld/Piquet Jr.’s No. 12.

“It’s our third pole in three races so we’re obviously very happy” G-Drive Racing driver Romain Rusinov confides after his crew set the best fastest time. “We were very fast and it paid off. It was important to get a good lap time right from the first qualifying session in order to anticipate potential weather changes. Our strategy was perfect but I keep in mind that Le Mans is a very difficult race. We’ll try to do our best on Saturday, not making a single mistake, trying to collect some points within the World Endurance Championship, as well as a great result, why not.”

“The final qualifying session was halted because of the bad weather but we’re very satisfied with the work accomplished during these two first sessions” Signatech-Alpine Team Principal Philippe Sinault says. “We’ve tried to deliver a good performance right from the start and that was the correct strategy, all of the drivers have been on the track and the cars have proved to be reliable and efficient. Now we’re waiting for precise weather forecast regarding Saturday in order to approach the race under the best conditions. If the weather happened to be favourable, we would have everything it takes to aim for a very good result.”

“Despite the traffic, I’ve been able to complete several clear laps and the car behaved perfectly well” Roberto Merhi explains, after having posted the fourth fastest lap time, while making his debut in Le Mans with Manor. “It’s a first for me as well as for the team, I’m really glad and very excited thinking that I’m facing a new challenge! I’m rather confident for the race, we’ve got a good car and the team is really efficient. We’ve got the perfect package to be competitive.”
After the traditional warm-up at 9am, the 84th edition of the 24 Hours of Le Mans will kick start at 3pm on Saturday June 18th. 11 chassis designed and manufactured by ORECA will be on the starting grid: the two Rebellion R-One in LM P1, five ORECA 05, two Alpine A460 and two ORECA 03R in LM P2. After its victory twelve months ago, through KCMG, ORECA will try to become the first manufacturer since Porsche (2008-2009) to win twice in a row in the LM P2 class.