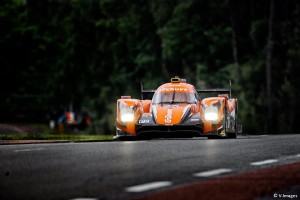 This first day of the 2016 edition of the 24 Hours of Le Mans proved to be positive for the teams entering the ORECA LM P2 chassis. In the lead throughout the free practice sessions, the ORECA 05 and Alpine A460 finished as the fastest ones in the first of three qualifying sessions. Indeed, G-Drive Racing clinched the provisional pole with René Rast, Roman Rusinov and Will Stevens. The trio came in front of Signatech-Alpine’s two cars as well as Manor’s car. This Thursday, as part of the final two qualifying sessions, the ORECA chassis will try to confirm these promising foretastes, attempting to achieve their fifth pole in a row this season, following on those secured in the FIA WEC and the ELMS.

KCMG shows up in the free practice sessions, G-Drive Racing on provisional pole…
Just like twelve months ago, rain and sunny spells kept on succeeding one another throughout the free practice sessions. An uncertain weather which did disturb the teams’ work, several of which preferred to remain in the pits at times, avoiding taking a single risk. Despite that, some teams still made the most of this opportunity to take their marks under those changing conditions. At the end of the four-hour session, interrupted by three red flags, the ORECA chassis had proved to be efficient. Though Signatech-Alpine was in the lead for a long time, the best lap time was finally posted by the No. 47 ORECA 05 entered by KCMG: one year after its first win, the Hong Kong-based team still appears as competitive. Richard Bradley was the fastest driver, in front of Nicolas Lapierre, on board the No. 36 Alpine, also manufactured by ORECA. Two other ORECA 05, Eurasia Motorsport’s and Thiriet by TDS Racing’s, got into the Top 5.

Following on this introductory warm-up, the serious business started again at 10pm, for the first of the three qualifying sessions. Just a couple of minutes in and several drivers had already started chasing time, amongst which René Rast behind the wheel of G-Drive Racing’s ORECA 05. The Austrian driver quickly took control of the session and never let go of it, even improving his best lap time once again, just a few minutes before the chequered flag was waved. Signatech-Alpine’s two Alpine A460 also shone, first with Nicolas Lapierre in the bucket seat of the No. 36, then with the No. 35 and Nelson Panciatici who finally came in second in front of his teammate. Soon after mid-session, Roberto Mehri managed to place Manor’s No. 44 ORECA 05 in fourth place, meaning that all of the provisional first four places are occupied by ORECA chassis exclusively.

“We’re obviously very happy with this provisional first place” René Rast confides. “Without a little bit of traffic, we could have been half a second faster. We’ll see on Thursday according to the weather forecast whether we should try to go faster, we can do it. The car behaves really well and is particularly well-balanced. Overall, ORECA prototypes are really competitive, so that’s rather positive. Everything went well.”

“The qualifying sessions went well despite the dense traffic” Nelson Panciatici explains. “We’ve done some good work on the car and we’ve now got to improve some set-ups. Taking to the track at a different time with the No. 36 Alpine was a deliberate choice to anticipate possible thunderstorms or a track improvement. We’ve progressed since the tests, even if today’s weather conditions were less favourable. Overall, the car is getting better and better. Tomorrow will be difficult to anticipate, it will all depend on the weather really, our objective being to post an even better lap time.”

Following tradition, the teams worked on racing setups and tried to complete the mandatory night laps while ensuring a good lap time considering the uncertain weather. Thiriet by TDS Racing ranked 7th, KCMG 9th, Richard Bradley said he was satisfied with the way the car behaved – he posted his time with old tyres. Murphy Prototypes drivers, who have continued to learn and get familiar with their ORECA 03R, appeared satisfied too.