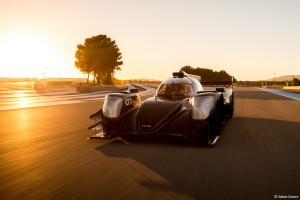 The family of Le Mans Prototypes designed by ORECA is growing. Indeed, this week was time for a first shakedown of the new ORECA 07 at the Paul Ricard Circuit. The car’s development programme ended this Thursday. Entrusted to Nicolas Lapierre, the car completed its first tests without encountering a single issue. In compliance with the new LM P2 rules, which will come into force in 2017, this prototype embodies ORECA Technology’s most advanced expertise and know-how.

Nicolas Lapierre: “I’m loving it already!”
Just like its big sisters – ORECA 01, ORECA 03, ORECA 05 – the new ORECA 07 took its first steps only a few metres away from Group ORECA’s technology department. After extensive studies, down to the smallest details, as well as intense production and assembly processes carried out throughout the past weeks, the car finally took to the track on Wednesday October 26th, at 03.29pm. Once the basic functions verified, Nicolas Lapierre took place on board and the development programme began. It will run up until the final homologation of the car in December. ORECA’s official driver fell in love with it almost immediately and went for several runs as planned, gradually discovering its potential. ORECA Technology crews then further worked development under today’s mild weather, focusing on different parameters, to do with sheer performance.
“Sensations on board the ORECA 07 were immediately very good” Nicoles Lapierre confides. “The ORECA 07 really represents a significant step forward from the ORECA 05. The level of attention brought to detail is impressive and really shows in the car’s excellent behaviour. A while ago, engineers shown me a really beautiful car, improved on all aspects. And I could just really feel that concretely from the moment I started testing it. I’m loving it already! We’ve just kept on running without any trouble and that was a really good working session, really calm. It actually makes me want to get back to the track again. The ORECA 07 really ushers in a new era for the LM P2 class.” 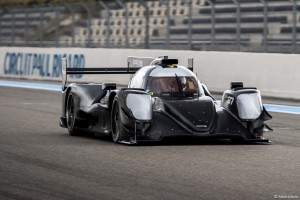 Powered by the Gibson atmospheric V8 engine, common to all LM P2 manufacturers, the ORECA 07 is ‘our furthest-developed prototype to date, the one on which we have made the least compromises possible’, said ORECA Technology’s Director David Floury. Based on the ORECA 05’s monocoque, the new ORECA 07 benefits from radically different aero as well as significantly increased efficiency and downforce. As required by the regulations, the ORECA 07 weighs 930kg – thorough research was dedicated to save weight – its ballast is thus quite substantial. With partnerships in place with reference brands such as X-Trac for the gearbox or PKM Consulting for shock absorbers, the mechanical aspect builds on from the ORECA 05, LMP2 winning car in the last two editions of the 24 Hours of Le Mans. Nonetheless each component has been optimised, whether in terms of sheer performance or reliability.
“It’s one phase of the programme, but an important and really positive one” David Floury explains. “We haven’t come across any trouble which has enabled us to work well. The level performance reached during these test days is exactly the one we hoped during simulation. So the car’s potential is extremely interesting. Quality is there too; we’ve really leaped forward from the ORECA 05. It’s only the beginning and there’s some more time before the first race in Daytona but it’s a first reward to everybody. There’s always a bit of pressure before a first shakedown. This date had been in our diaries for a long time now, so everyone in the crew should be proud of the work accomplished. Now, moving on to the next phase!”

LM P2 manufacturer since 2011, ORECA has clinched 41 wins, 36 pole positions and won 12 titles. A list of successes achieved by customer teams, 12 of which have tasted victory before. The ORECA 07 will enter its first race in late January as part of the 24 Hours of Daytona. Additionally, the car will also compete in the WeatherTech SportsCar Championship, the FIA World Endurance Championship and the European Le Mans Series.