On 13 June, 10 ORECA 07s hit the track for the 8 Hours of Portimão, second round of the FIA World Endurance Championship, its first visit to Portugal. At the hilly Algarve circuit, JOTA Sport pulled off a one-two thanks to Davidson/da Costa/Gonzalez after a thrilling duel with the sister car driven by Gelael/Vandoorne/Blomqvist, despite the latter’s pole position. The #38 driver line-up is now leading the classification.

The ORECA 07s set the tone in the free practice sessions by clocking the top three fastest times. António Félix da Costa performed with gusto and at home at the wheel of JOTA Sport’s #38 in Free Practice 1, but defending champion United Autosports USA and Paul di Resta took up the reins in the second and third sessions.

Qualifying began on Saturday at 18:20 local time. Though Alpine Elf Matmut scored its first pole position in the FIA WEC thanks to Matthieu Vaxivière, Tom Blomqvist driving JOTA Sport’s #28 ORECA 07 clocked the quickest time in the LMP2 class, barely 45 thousandths of a second ahead of the #38 JOTA Sport car driven by António Félix da Costa! The top 5 was completed by Racing Team Nederland’s #29 ORECA 07, United Autosports USA’s #22 and Team WRT’s #31.

On this sunny race Sunday in Portimão, battles raged throughout the eight hours and the final results were decided in the final five minutes, with JOTA Sport’s trio Davidson/da Costa/Gonzalez clinching the win.

At the wheel of the #38 ORECA 07, after an intense face-off with the #38 sister car, local hero António Félix da Costa got the advantage on pole-sitter Tom Blomqvist thanks to a dust-up at the start. The two JOTA Sport cars finished ahead of the winning car of the first FIA WEC round at Spa-Francorchamps, the #22 fielded by United Autosports USA entrusted to Hanson/di Resta/Boyd.

Typically a contender, Team WRT’s ORECA 07 finished in fourth place after a relatively solid performance, just ahead of Inter Europol Competition’s #34, also in good form throughout the weekend. After a solid race, the Richard Mille Racing Team took a credible sixth place.

In Pro-Am, Realteam Racing’s #70 ORECA 07 shared by Norman Nato, Esteban Garcia and Mathias Beche claimed the top step on the podium, joined by DragonSpeed’s #21 and High Class Racing’s #20. Stuck in pit lane for several minutes after contact with another car while in the lead, Racing Team Nederland’s #29 finished fourth in the class.

Despite fierce battles in LMP2, all ORECA 07 chassis made it to the chequered flag. Developed and constructed by ORECA Technology, the Alpine A480 impressed in the top class. On Saturday, Matthieu Vaxivière scored the marque’s first pole position in the FIA WEC. On Sunday, Nicolas Lapierre clocked the fastest in-race lap. At the wheel of the #36, André Negrão secured yet another podium, finishing third at the 8 Hours of Portimão behind the two official Toyotas.

The third round of the FIA WEC is set for 18 July at the Monza circuit in Italy before the legendary 24 Hours of Le Mans on 21-22 August. 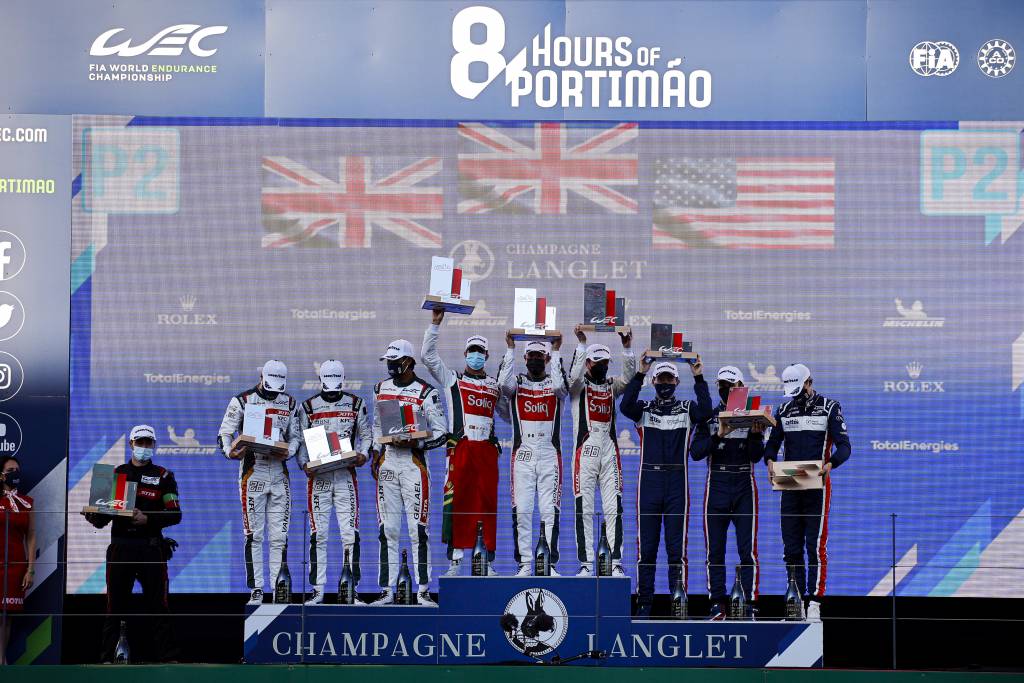